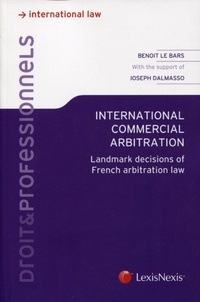 French trained lawyers are familiar with collections of important decisions, so-called grands arrêts, in different areas of law. While this might come as a surprise to many common lawyers, there is indeed an important focus on case law in many areas of civil law, such as private international law, arbitration, etc. A first edition of this book was published in French in 2016. However, this new edition is not a translation only : since the original French edition was published, a number of landmark decisions, internationally commented, have introduced noteworthy developments in arbitration law, which provided the opportunity to update the various topics. We also added a new analysis of the adjudicative powers of arbitral tribunals that didn't appear in the first edition, to set out all the functions that arbitral tribunals may perform and that make arbitrators (dis)similar to national judges. Derived from centuries of developments, the principles guiding all arbitration cases permeate each of our actions, as counsel or arbitrator. There can be no proper arbitration process without respecting the adversarial principle, independence, the autonomy of arbitrators, equal treatment of the parties, etc. Therefore, arbitrators are placed in a singular position in which they must uphold procedural principles, as should any judge, while keeping in mind that their jurisdiction is restricted in time and by the subject matter of the dispute. Their mandate also requires that they behave differently from national judges, capitalizing on the more informal nature of arbitral proceedings, while at the same time remaining steadfast in the face of parties acting against the original spirit of arbitration bequeathed by major arbitrators. Arbitrators and practitioners proceed with guidance and are aware that national courts, when reviewing an award, will penalize the violation of these principles by setting it aside. This book is structured as a source of information for non-French/ non-civil law lawyers seeking ready access to those principles applied by the courts when controlling the arbitration outcome. All practitioners, in-house lawyers, scholars, and students who are curious about the French / civil law perspective on international commercial arbitration will benefit from using this book in their personal practice.

This landmark decision, which will further reinforce the favorable environment of the French judiciary system towards international arbitration, is a welcome development, in particular for the resolution of disputes between foreign parties and French public entities.

The developments discussed below concern international arbitration only. French arbitration law was codified in 2011. The main source of legislation on arbitration is Book IV of the Code of Civil ...