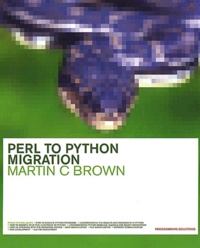 The first section will show you the basic layout and approach of the two languages whilst the second section moves on to the specific differences of using Python data types and objects over Perl variables. The book then looks at the core technologies behind the Python language, including the exception system for handling errors, the class and object orientation system for creating new classes and instances and how to split your program into functions and modules for easier management. All of these basics are treated with respect to people's existing understanding and skills in Perl programming and show how they can be leveraged in Python.The last section of the book focuses on specific areas of programming: data manipulation, network communication, and web and other technologies to demonstrate to the reader how to make the move from Perl to Python programming.

I found this Perl script while migrating my SQLite database to mysql I was wondering (since I don't know Perl) how could one rewrite this in Python? Bonus points for the shortest (code) answer :)...